Dori Hillestad Butler won the 2011 Edgar Award for Best Juvenile Mystery for The Buddy Files: The Case of the Lost Boy. She accepted the award at a gala banquet last week in New York City.

Ever since I found out I had a book nominated for an Edgar Award back in January, I’ve been telling everyone, “I know it’s a cliche, but I’m happy just having a book nominated. Really, I am!”

I think my husband got tired of hearing it because when we first arrived in New York last week, he said, “Oh, come on. You want to win! I know you do!”

But there was another part of me that really didn’t want to win. Part of me wanted to keep that dream alive somewhere in the distant future, so I’d have something to keep reaching toward. 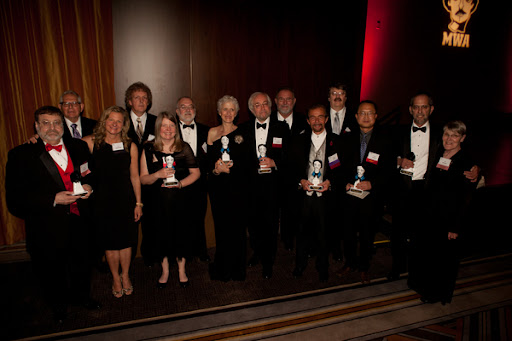 Now that I have both the children’s choice award and the Edgar, I’ve been asking myself, “where do I go from here?” What do you do when you’ve achieved the highest honor you’ve ever dreamed of?

But it’s not that simple.

I don’t know…a dream is something you just have. You don’t pick out a new one the way you might pick out a china pattern.

Then while I was putting the finishing touches on a speech I gave at the Des Moines Public Library this week, I realized something. I don’t write to win awards. I write to make sense of the world…I write because I want to turn non-readers into readers…I write because I can’t NOT write (I learned this eleven years ago when I seriously considered giving up the writing to go back to school and become a nurse midwife).

There’s nothing more satisfying to me than to receive a letter from a child that says something along the lines of “I never liked reading until I read your book.” Or a letter from a parent that says, “your book is the first book my child read all by herself.”

When I think about that, I realize my job isn’t finished. I have more books to write. More readers to connect with. And life is lived in the day to day, between the big moments (like winning an Edgar).

(BTW, if you really want to read the raw, starstruck, can’t-believe-it-really-happened post (with pictures), go to http://dorihbutler.livejournal.com/145070.html)