As a kid, I was obsessed with Halloween. I mean, free candy! Candy was rare in our house. On October 31 every year, I’d amass as much of it as possible, come back to the house for the sister swap (I had three sisters, we each had different preferences, and usually at least one of us had braces that made some candies taboo), and then put my final collection in a shoe box. Showing willpower that I only wish I still had today, I strictly rationed my stash so that it lasted as long as possible. My record was the year I stretched it until Valentine’s Day. 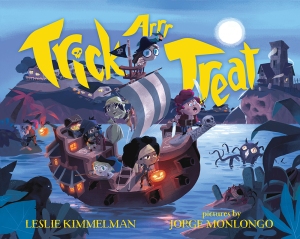 It’s actually amazing that it’s taken me so long in my writing life to get to Halloween—but I’m happy with the result. The title of my picture book, Trick Arrr Treat, came first, and then I just went with it. Pirates were a big deal to my son when he was little. When we went to the beach, we’d bring along his pirate hat and a pirate flag, and we’d bury some kind of treasure for him to dig up. 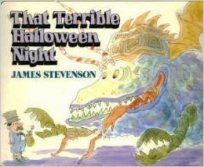 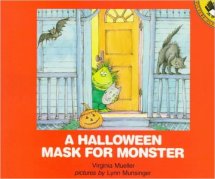 My two favorite Halloween picture books are That Terrible Halloween Night by the talented and hilarious James Stevenson, and A Halloween Mask for Monster by Virginia Mueller, ill. by Lynn Munsinger.

My books almost always end up with a dog or two in them—this time, the dog plot was one of several ideas my editor came up with, and it seemed like a natural fit. I especially had fun coming up with the characters’ names; I think everyone should have a pirate name! What’s yours?