Rooting for Rafael Rosales by Kurtis Scaletta is the story of two very different protagonists. Rafael has dreams. Every chance he gets he plays in the street games trying to build his skills, get noticed by scouts, and—someday—play Major League Baseball. Maya has worries. The bees are dying all over the world, and the company her father works for is responsible, making products that harm the environment. Follow Rafael and Maya in a story that shifts back and forth in time and place, from Rafael’s neighborhood in the Dominican Republic to present-day Minnesota, where Maya and her sister are following Rafael’s first year in the minor leagues. In their own ways, Maya and Rafael search for hope, face difficult choices, and learn a secret—the same secret—that forever changes how they see the world. 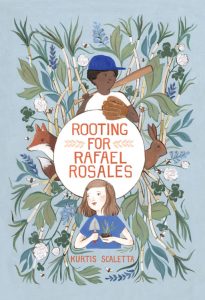 We were lucky enough to hear from Kurtis about his experience creating this story:

When a new book comes out I like to go back and look at the earliest file I can find, where it all began, the first words that became a novel. Though much of a book will change as I go through the phases of writing and revision, I always find the opening scene is intact. That very first dabble will be there in the finished book, revised but recognizable.

That is true for Rooting for Rafael Rosales. A lot of ideas were bouncing around in my head when I began writing that night (January 25, 2014): baseball in the DR, which I had been reading about; Spring Training, which I had wanted to write about since I went to Fort Myers in 2003; the way that fans watch sports with a feeling of personal destiny; and bees. I was thinking about bees.

From that jumble I had a vision of a girl sitting in a baseball stadium, completely apathetic about the game, thinking about the future of the planet, while a player who has been working his whole life for this moment takes the field. Both of them have valid feelings; but they have different experiences. I decided their lives would then intersect, however briefly, and both would be changed. That scene now opens part two, but it is in that scene that the book was born.

So although Rooting for Rafael Rosales has two distinct stories—the sports-obsessed island boy and the nature-obsessed landlocked girl—they have always bound up together. The inspiration is that moment where their lives intersect.

Rafael is very different from me, but I found a spark of familiarity in his ambition, his fear of failure, even in his occasional bitterness and jealousy, which he outgrows. Maya is more like I was as a child: solitary, dreamy, and sensitive. I found both these characters easy to love, and their stories unfolded naturally.

But bringing their stories together was a challenge. Past the first scene, how and when would Rafael and Maya meet? How would they change each other? That is where I did the most writing, cutting, rewriting, and cutting again. Even at the end I wonder if people will see this as two books mashed together, though it was always meant to be one.

However, I realize now one way their stories are the same. Rafael wants his father and friends to look at his skinny, undeveloped body and see the major league slugger he will become. Maya wants her family to look at her backyard garden and see that she is out to change the world. They are both children who want the respect given to adults, if not for whom they are at the moment, then for the adults they will become.

I didn’t think of it that was as I wrote but now see it in scene after scene: the way these two children ache to be taken seriously, especially by their fathers. And while this is true of all children, I think it is especially true of Rafael and Maya, that their dreams are larger than their bodies and their abilities. And that’s why I think the book ultimately works. That is why their stories resonate.

If I realized such themes before I set out to write a book, I could be more attentive to them. But the need to discover is what keeps me going, turning those first scenes into finished novels where so many other projects falter and fizzle. It’s what I learn about myself.

Thanks, Kurtis. To find out more about Rooting for Rafael Rosales, check out our website.

One thought on “Author Insight with Kurtis Scaletta”