Pursued is the first book in a gripping futuristic series, Secrets of the X-Point, by Gary Urey. In it, Axel Jack and Daisha Tandala are two thirteen-year-old friends running from a billionaire madman who killed their scientist parents and now wants what the kids have—GeoPorts (Geographical Transportation Systems.) The GeoPort, invented by their parents, has the ability to transport a person to any place on Earth within seconds. Soon, the chase becomes more than just a high-tech game of hide-and-seek, but a war for control of everything—money, culture, politics, and power.

We were lucky enough to sit down with Gary and talk about basing fantasy in reality, changing directions, and Pursued.

Q. What’s the easiest and hardest part of creating a book?

A. There is no easy part of creating a book. However, there are plenty of hard parts, like filtering through a hundred bad ideas to get a good one and slogging through until the end. I have a few books that have sputtered out at the 20,000-word mark because the idea wasn’t strong enough. You need a lot of self-discipline to sit in a chair for hours and write when every fiber of your being wants to walk the dog, play on the Internet, or go jogging. Other than that, it’s the greatest job in the world!

Q: What was your inspiration for your title?

A: Honestly, Pursued was just a working title that survived the editor’s (the awesome Kristin Zelazko!) red pen. The series title, Secrets of the X-Point, made sense because the X-Point, a real phenomenon also known as an Electron Diffusion Region where the earth’s magnetic field connects with the sun, is the final piece of the puzzle that makes teleportation possible in the book.

Q. What was the process of working with your editor like?

A. Ha! It’s exciting and humbling at the same time. Exciting because you are working together to make the book better, humbling because a particular character, chapter, or paragraph you may love gets hacked by the editor and never makes it into the book. Writers need editors because the author is often too close to the material. Stuff that you thought was better than Shakespeare in reality may just be confusing to a reader. Also, grammar mistakes and poorly-worded sentences need a second pair of eyes to clarify.

Q. What makes your book stand out?

A. The science! The GeoPort device the kids use to teleport is only possible because of advanced GPS technology. The book is a traditional action/adventure thriller—kids on the run, bad guys want what they have, etc—but the kid’s ability to teleport isn’t through magic. Everything is possible because of advancements in science. Also, Pursued is just a gripping read with fun protagonists who must survive against almost overwhelming odds.

Q. Do you have any writing quirks?

A. Only if you call writing in a customized shed in my back yard quirky. I live in Maine where the winters are extremely cold. My shed is insulated and wired for electricity so I can plug in a space heater. Rarely do I need an air-conditioner in the summer. It takes about thirty minutes for the 6×6 shed to heat up so I can write. Also, I live near a busy intersection so I always wear Bose noise-reduction headphones. They completely block out all sound.

Q. Are you working on any other projects?

A. Yes, I’m working on books two and three of Secrets of the X-Point. I can’t wait to continue Axel and Daisha’s adventure! I’m also working on another humor book in the vein of Super Schnoz and am currently developing a pen pal-style book about two boys in outer space with the very funny Bart King of Bart’s Big Book of Girls Stuff, Boy Stuff, Gross Stuff, Spy Stuff, and many others.

Q. What books did you like to read as a kid?

A. Comic books! I was obsessed with them. My favorites were Spiderman, Green Lantern, Silver Surfer, Captain America, Fantastic Four, Night Crawler from the X-Men, and many others! My favorite books as a kid were How to Eat Fried Worms by Thomas Rockwell and Of Wolves and Men by Barry Lopez, a non-fiction book about the primal connection between wild wolves and humans. I still have my original copy!

A. My goal was never to be a writer. As a young man, I wanted to be an actor. I graduated from the American Academy of Dramatic Arts in NYC and hit the audition trail. I had a roommate during those days who was an artist. His name is Steve Casino, a well-known pop artist today, who back then wanted to be a children’s book illustrator. He landed a job illustrating a book about the life of Wild Bill Hickock. I remember picking up the manuscript the publisher had sent him and hearing a very powerful bell ringing in my soul. From that moment on, I wanted to write children’s books.

Thanks so much, Gary! Find out more about Pursued here or check out a cool book trailer about the series here.

Cornelius was not expecting a cat to be left on his doorstep in Drat That Fat Cat! by author-illustrator Julia Patton. 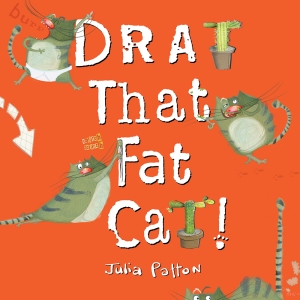 We were lucky enough to sit down with Julia Patton to chat about Drat That Fat Cat!, her career trajectory, and the cat—and human—who inspired the story.

Q: How did you become a children’s book author and illustrator?

A: When I was very little my earliest memories were playing ‘Post Office’ underneath my Grandma’s kitchen table. I’d spend hours cutting and sticking making envelopes and stamps to post to my long suffering sister. I always knew my heart lay in being a creative so I followed this pathway through my undergraduate in Textile Design which was very fine art-based. I then spent many years creating greeting cards & wrap for international stores. My interest in children’s picture books was reignited when I began sourcing books for my own small boys. I fell in love with picture books and I knew it was time to go back to big school myself. I swiftly enrolled on the MA Illustration program at Edinburgh University and had my first picture book Unstoppable Max was published a year later.

Q: In Drat That Fat Cat! which came first: the text or the art?

A: Both are intrinsically linked, interwoven at every stage. When writing books I initially create the protagonist in my sketch book, secondly the other characters, and then I create a title, which just has to be a showstopper! Then the story arc grows from there. The funnier the better. I find humour and picture books perfect partners. I wrote Drat That Fat Cat! over five years ago and showed it to my editor and art director at The International Children’s Book Fair in Bologna last year. The silly end papers had us all howling with laughter. We worked together collaboratively to strengthen the story and its publication date is this October.

Q: Do you have a cat? What would you do if one was left on your doorstep?

A: I’ve had one very fat, stray cat arrive at my doorstep a few years ago, covered in fleas, wriggling with worms and creating the most horrid smells. We loved her. The idea of the highly contrasting Cornelius Van Ploof’s character in Drat That Fat Cat! comes from my beloved father. He loves order, with everything being very neat and tidy. I knew putting him and a flea-bitten, smelly cat together would drive him utterly bonkers! He’s yet to see the book. I may be in trouble!

Q: What is your favorite medium to work with?

A: With an undergraduate in textiles I’m instinctively drawn to creating beautiful aesthetics and tactile surfaces and with my new found love of illustration the two are now inseparable. I love collage and incorporate it into picture books whenever I can. I believe the multi-media approach to my illustrations make them easily identifiable from other’s work. 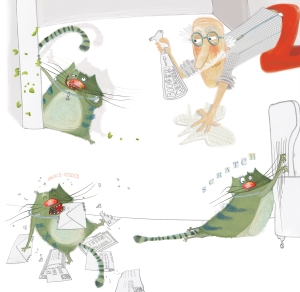 Q: What was the process of working with your editor and art director like?

A: Albert Whitman and I are on our third book together and Jordan Kost has been my art director on all of the projects. She is an incredibly talented creative to work with, professional, hard-working and we’ve developed a very close and hilarious friendship which moulds our books. She is the magical glue. I’d be lost without her encouragement, support and humour.

Q: Do you have a regular routine while creating a book?

A: The routine is work, work, work. Seven days a week, lots of late nights, until it’s finally done. The best books happen when you listen carefully taking everyone’s advice from art directors, editors and publishers. Then take a breath and begin the next project.

This quote is exactly how I feel: Choose a job you love, and you will never have to work a day in your life. —Confucius

Q: Are you working on any other projects?

A: I write continuously and have approximately 6-10 books in various states of completion that I visit and rework at different times. I have been very fortunate to have been commissioned three of my new titles recently that I’m going to be working on over the next year. It’s going to be a very busy but exciting time. I have also recently written a story called Charlie & Pip inspired by a non-verbal child we know as family friend. It’s a story about a child not engaging in the outside world or communicating with anyone, until she meets Pip. He becomes her voice, her emotional buffer, showing her how to interact with others. This is a book for anyone struggling to find their voice, whether it’s a language barrier, anxiety or self-confidence problems. I think it’s a special book with a story that needs to be told. I’m very proud of it.

I believe my responsibility and role as an author and illustrator is to illuminate words, suggest the magical and interpret the unspoken.

A: I was obsessed with any book by Richard Scarry because of all the funny details I could find, this was later replaced by Heath Robinson with his hypnotic contraptions and fabulous inventions. I adored, and still do, Dr. Seuss’s wonderful books. Did I Ever Tell You How Lucky You Are? is a favourite of mine. Now I read every picture book I can get my hands on. I’m initially attracted to the artwork but love deconstructing the narrative. Some of my favourite illustrators include Quentin Blake, Barroux, Dan Santat, and Oliver Jeffers. 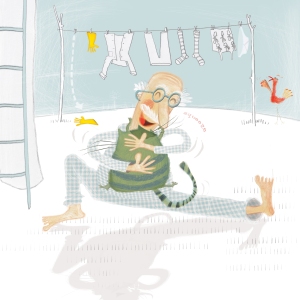 Thanks, Julia! Fall in love with Cornelius and his fat cat, and check out the book on our website. Find out more about Julia on her website, and don’t forget to follow her on Twitter.